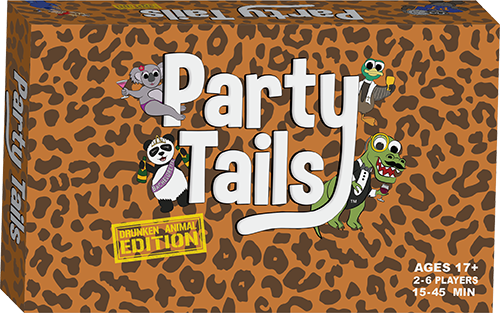 Party your tail off!

Party Tails is a card game for people that like animals, drinking, and animals drinking – no drinks required! The goal is to knock out your opponents by giving them the total number of drinks listed on their Animal Card. You’ll choose your Animal, hand out drinks, play Party Cards to mix things up, knock out all of your opponents, and win bragging rights for being the ultimate party animal!

Knock out your opponents by giving them the total number of Beer, Wine, and Liquor Cards indicated on their Animal.

On your turn, give a Drink Card to another player OR play a Party Card, which offers positive and negative special abilities.

Watch out for Party Poopers, Chasers, Buzzkills, and Immediate Cards, which can affect gameplay in a variety of ways.

Party Tails is a last-man-standing card game for people that like animals, drinking, and animals drinking – no drinks required. The goal of Party Tails is to knock out your opponents by giving them the total number of drinks listed on their Animal Card.

Party Tails is a strategic card game for 2 – 8 players. We recommend it for anyone ages 17 and older due to its alcohol theme, crude humor, and adult language. An average game can last between 15 and 45 minutes. While Party Tails is a game about drinking, you don’t have to drink to play it, so everyone can join in and party their tail off!

Party Tails was successfully funded on Kickstarter! We are currently in the manufacturing phase of making the game and are on track to send out games to our backers in May of 2020. We will then have Party Tails available to purchase through an online retailer shortly after we complete our Kickstarter fulfillment. Follow us on Facebook and Instagram to see all of our most recent updates as they come along.

The History of Party Tails

Party Tails is a passion project from four friends living in Tampa Bay, Florida. We love to get together for game nights and for nights out at the bar or local breweries. We came up with the idea in the summer of 2018 at one of our favorite breweries in Tampa while we were playing some of our other favorite games. Since two out of the four of us don’t drink as much as the others, we loved the idea that it could be a card game for anyone to play, whether they drink or not.

During the creative process, we came up with more ideas than we could include in the game. The deck is already 155 cards! We have lots of ideas for expansion packs and other variations of the game, including one that will be family friendly!

Consumption of alcohol is not required for participation in this game. If you choose to drink alcohol, please do so responsibly. Party Tails and Waddling Panda, Inc. are not responsible for the consequences of your actions.